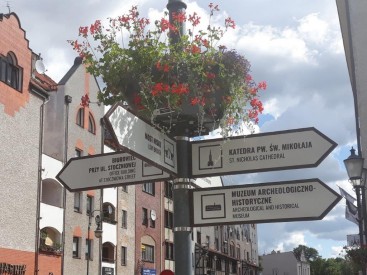 Three new city routes were developed in Elbląg: Old Town Route, Parks Route and Spatial Forms Route. They combine the Elbląg cultural and natural heritage sites into a coherent thematic and spatial framework. 69 objects were tagged along the 16-kilometre long route. There is also a multimedia application and a guide, which you can get free of charge at the Tourist Information Points at the Old Town: in the Old Town Hall and the Market Gate.

Follow the thematic routes. The map available in the application will guide you along the developed city routes, and the virtual guide will not let you miss the most interesting attractions in the city.

The Commune of Elbląg City is implementing a project co-financed by the European Regional Development Fund as part of the Regional Operational Programme of the Warmia and Mazury Region for 2014-2020: Creation of didactic routes for tourism and recreation purposes in Elbląg.